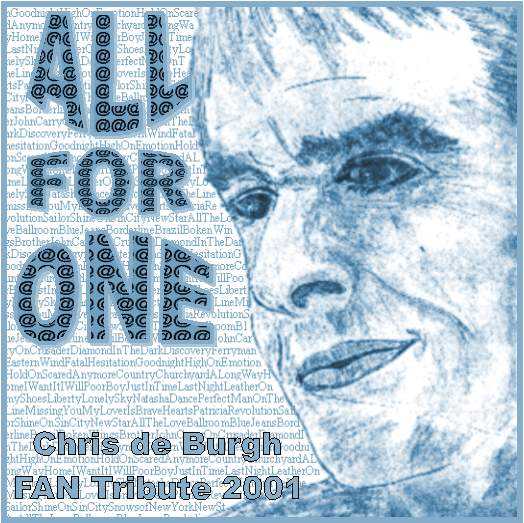 Call it a labour of love, if you will...

A group of like-minded individuals from all over the world have something in common, you see. They love to sing, and they are inspired by by the words, music, philosophies, stories, thoughts, images, rhymes and the just the basic "Joie de vivre" of a certain songwriter from Ireland... Chris de Burgh -- the man (and the artist) speaking acrosss the planet through his muse has touched us all in a very profound way.

This year's disc is once again the result of that collective effort. In fact, it's the second edition of what, hopefully will become an annual tradition. Time will tell..

In fact, Chris de Burgh may have gotten the whole ball rolling on this project himself without even realizing it! Back during the 1995/96 tours, he made it a part of his concerts to invite his fans up on stage with him to become part of the show. (I myself had the privilege to do this with him)... How many artists would have the courage to do this? How many artists take these kinds of risks on stage? How many artists take requests from the audience during a concert these days? Chris de Burgh has a rare and special talent, and the proof of it, I believe, is here on this disc.

I hope that you all enjoy this music, and that it gives you half as much pleasure as we had when we were making it. Perhaps it might inspire you to give it a try yourself? The more the merrier! See you in 2002!